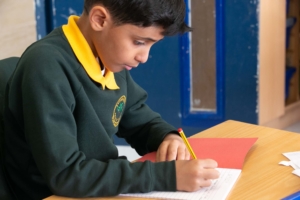 Evergreen operates a house system. Every child and member of staff is given one of three houses to support. Houses are essential, as they create community spirit and give the children an opportunity to contribute to something bigger that involves children from all year groups. The children also support and raise money for the three house charities. Our houses are Salahudeen Ayubi, Dhul qarnain and Umar  farook, Each house is represented by their House Captains.

The House Captains are responsible for selecting potential charities and promoting those charities, leading their house in competitions and events, and representing the school in the community. Each house is supported by a member of staff who acts as House Leader, the house system is overseen by the Headteacher. Below are our current House Leaders and House captains.

Every week, the house points are counted by our House Captains and a weekly winner announced during the Jummah Assembly. House points are then tallied over the course of a term a winner is announced, and the children in that house are rewarded with a special event. At the end of the year, once all house points are tallied, the House Champions will be announced. to see how the different houses are doing this year and to read about this year’s exciting house events.

The House Charities and Fund-raising

Each year, the newly-elected House Captains are responsible for compiling a list of possible charities that are close to the hearts of pupils, staff and parents. Then, the House Captains decide which type of charity each house will support, either a local, national, international or animal charity. Finally, the House Captains will present their shortlist to their house, who will then vote to decide upon their House Charity.
Throughout the year, each year group will have the opportunity to organise a fundraising event, with all monies going to the four house charities. Additionally, the school will continue its support for Orphans project with Islamic help and raise money for Them.

Charity begins close to home! Ensuring the schools future and expansion, our team have many ideas to start raising funds to create a new Art and science lab!

This site uses cookies. By continuing to browse the site, you are agreeing to our use of cookies.

We may request cookies to be set on your device. We use cookies to let us know when you visit our websites, how you interact with us, to enrich your user experience, and to customize your relationship with our website.

Click on the different category headings to find out more. You can also change some of your preferences. Note that blocking some types of cookies may impact your experience on our websites and the services we are able to offer.

These cookies are strictly necessary to provide you with services available through our website and to use some of its features.

Because these cookies are strictly necessary to deliver the website, refuseing them will have impact how our site functions. You always can block or delete cookies by changing your browser settings and force blocking all cookies on this website. But this will always prompt you to accept/refuse cookies when revisiting our site.

We fully respect if you want to refuse cookies but to avoid asking you again and again kindly allow us to store a cookie for that. You are free to opt out any time or opt in for other cookies to get a better experience. If you refuse cookies we will remove all set cookies in our domain.

We provide you with a list of stored cookies on your computer in our domain so you can check what we stored. Due to security reasons we are not able to show or modify cookies from other domains. You can check these in your browser security settings.

We also use different external services like Google Webfonts, Google Maps, and external Video providers. Since these providers may collect personal data like your IP address we allow you to block them here. Please be aware that this might heavily reduce the functionality and appearance of our site. Changes will take effect once you reload the page.